The story of how Hawai'i found its place on the map in the mid-Pacific is a tale filled with discovery, adventure and conflict.

When European explorers first entered the Pacific, they found that the great ocean had already been mastered by navigators whose nautical skills rivaled their own: the Polynesians. The presence of the Polynesians throughout the ocean's isles was testimony to an extraordinary seafaring heritage.

Starting from islands near Southeast Asia around 2500 BC the early peoples of the Pacific had island-hopped until they reached the Tonga and Samoa groups about a thousand years later.

When driven from an island by overpopulation, famine or defeat in battle, Polynesians would set off to colonize new lands: sometimes sending exploring parties ahead, sometimes simply trusting fate and their own exceptional abilities to lead them to their destination. They were not always rewarded; many expeditions perished at sea. Such long voyages were planned months in advance. 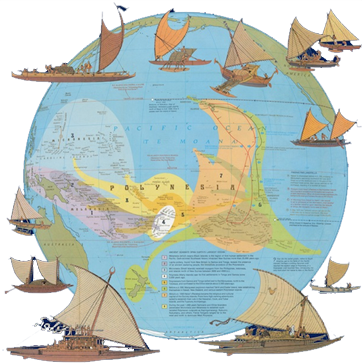 The Hawaiian Islands were first settled when Polynesians from the Marquesas Islands ventured out to Hawaii's big island in Canoes. The Story of Hawaii Museum unites the history, topography, cartography and recorded curios of the Hawaiian Islands .Explore the great and rich history of Hawaii and its people. Here you can get sequential timeline events of significant dates and occasions in Hawaii History.